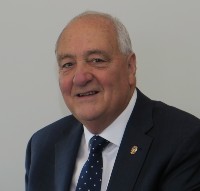 Mr Luxton has served the South Canterbury district by leading fundraising appeals, holding governance roles in the education and health sectors, and volunteering with Lions Clubs International on a regional, national and international level.

He says being awarded the Queen’s Service Medal “is a humbling, but pleasant surprise.”

Mr Luxton has been a member of the Temuka Lions Club since 1974 and has held several leadership positions with the Lions Clubs, including as the elected director on the International Board for New Zealand, Australia, Islands of the Pacific and Indonesia from 1994 to 1996 with Lions Clubs International.

He was a member of the Temuka High School Board of Trustees (now Opihi College) for 18 years and served as its chair for a term.

Mr Luxton led efforts to fundraise for an MRI scanner for Timaru Hospital and raised more than three million dollars for the equipment in 18 months.

“I felt it was important for the community to have one available, rather than having to travel two hours up the road to Christchurch every time.”

“We set out to raise $1.6 million. We ended up raising $3.1 million. Within 18 months the new MRI suite was built, the MRI was purchased and installed, the staff trained, and it was up and running. So I’m quite proud of that.”

Mr Luxton is currently the Chair of the Aoraki MRI Charitable Trust and the South Canterbury District Health Board.

Making a difference was what motivated Mr Luxton to stand for election to the South Canterbury District Health Board in 2001.

“I had worked all my life in the health sector and I felt like I had something to offer from a primary health care point of view. I felt I could make a difference in the way the health system worked.”

Born in Waimate, his family moved to Christchurch when he was eight. He attended Bamford Primary School, and Linwood High School. He then went to Central Institute of Technology in Petone to study to become a pharmacist.

When asked why he chose pharmacy as a career Mr Luxton says he had a feeling that he wanted to do something to help people.

“I didn’t come from a privileged or wealthy background. My father worked for New Zealand Railways.”

“It seemed like a good choice to get involved in one of the caring industries, like health, something that I would be able to make a contribution in.”

After completing his studies, he worked as an intern pharmacist at Kendal Pharmacy in Christchurch, and a few years later purchased his own pharmacy in Temuka at a young age.

According to Mr Luxton, being a pharmacist in a small rural town like Temuka you get to know your patients very closely and personally. “It was the people contact and being able to help people that I enjoyed most.”

“I think pharmacy is a tremendous training ground for developing all sorts of skills, people skills, financial skills, all those things other than pharmacy.”

Mr Luxton owned the pharmacy in Temuka for 35 years and worked in the pharmacy six days a week. However, he always made time to give back to his community.

“It’s a service ethic that came from my parents. They handed that on to me. It’s just how I think we should live our lives really.”

He has been married to Janet for 52 years, and they have 2 daughters and six grandchildren.