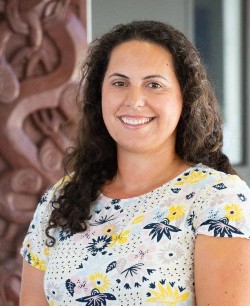 The judging panel, which included representatives from the Ministry of Health, New Zealand Medical Association, District Health Boards, Hospital Pharmacy and the Pharmaceutical Society were impressed by Ms Hikaka’s level of commitment to clinical pharmacy in New Zealand by promoting the need for, and ability of, pharmacists to other health professions.

The panel especially noted her achievement of being the first pharmacist to be awarded the Health Research Council Clinical Research Training Fellow position.

Chair of the panel, Pharmaceutical Society president Ian McMichael, stated Ms Hikaka’s nomination included many letters of endorsement from her colleagues in the pharmacy profession, noting her commitment to improving care for the elderly, particularly those in Residential Aged Care Facilities.”

Her colleagues also noted her “unfaltering commitment and dedication to the advancement of Māori health and Māori pharmacists’ roles.”

Ms Hikaka, is currently completing her PhD at the University of Auckland focussing on equitable access to medicines and pharmacist services for older Māori. While she does this she is on leave from Waitematā District Health Board (DHB), where she works as an experienced clinical pharmacist specialising in older adult health in primary and secondary care. She strongly advocates for clinical pharmacy practice in Aotearoa, promoting the need for, and ability of, pharmacists to provide clinically and culturally safe services.

Marilyn Crawley, recently retired Chief Pharmacist of Waitemata District Health Board, supported Jo’s nomination for the award, saying “During her time with Waitematā DHB Jo has significantly influenced policy, practice and research into the care of the elderly, particularly those in Residential Aged Care Facilities.”

The judging panel congratulated Ms Hikaka on being “an outstanding example of excellence in professional, clinical pharmacy practice.”

Ms Hikaka thanked the panel, saying "It was a great honour to win the award, especially since there are so many other amazing pharmacists in the profession. There are many who have mentored me through my career, and I have looked to their examples to shape my own practice”

“For me it means that there is a space for Māori to see themselves succeeding within the pharmacy profession,” added Ms Hikaka.

Ms Hikaka is passionate about helping those people that have reduced access to healthcare and working to improve those patients’ experiences.

“I think we need to honour our elders. We can do this is by doing our best to provide them with a positive experience when they see their pharmacist. Often this means doing more than just thinking about medicines.”

“I feel an extra responsibility now to continue to uphold clinical excellence and culturally safe practice and to make sure that I continue to support the profession as much as I can in that space.”

Ms Hikaka says she hopes that the publicity around the award shows people how rewarding being pharmacist can be.

“I hope people will see that I am passionate and enjoy the role and that you can achieve meaningful health improvements in your role as a pharmacist.”